Distinctive striped flowers, fern like leaves and a red stalk. 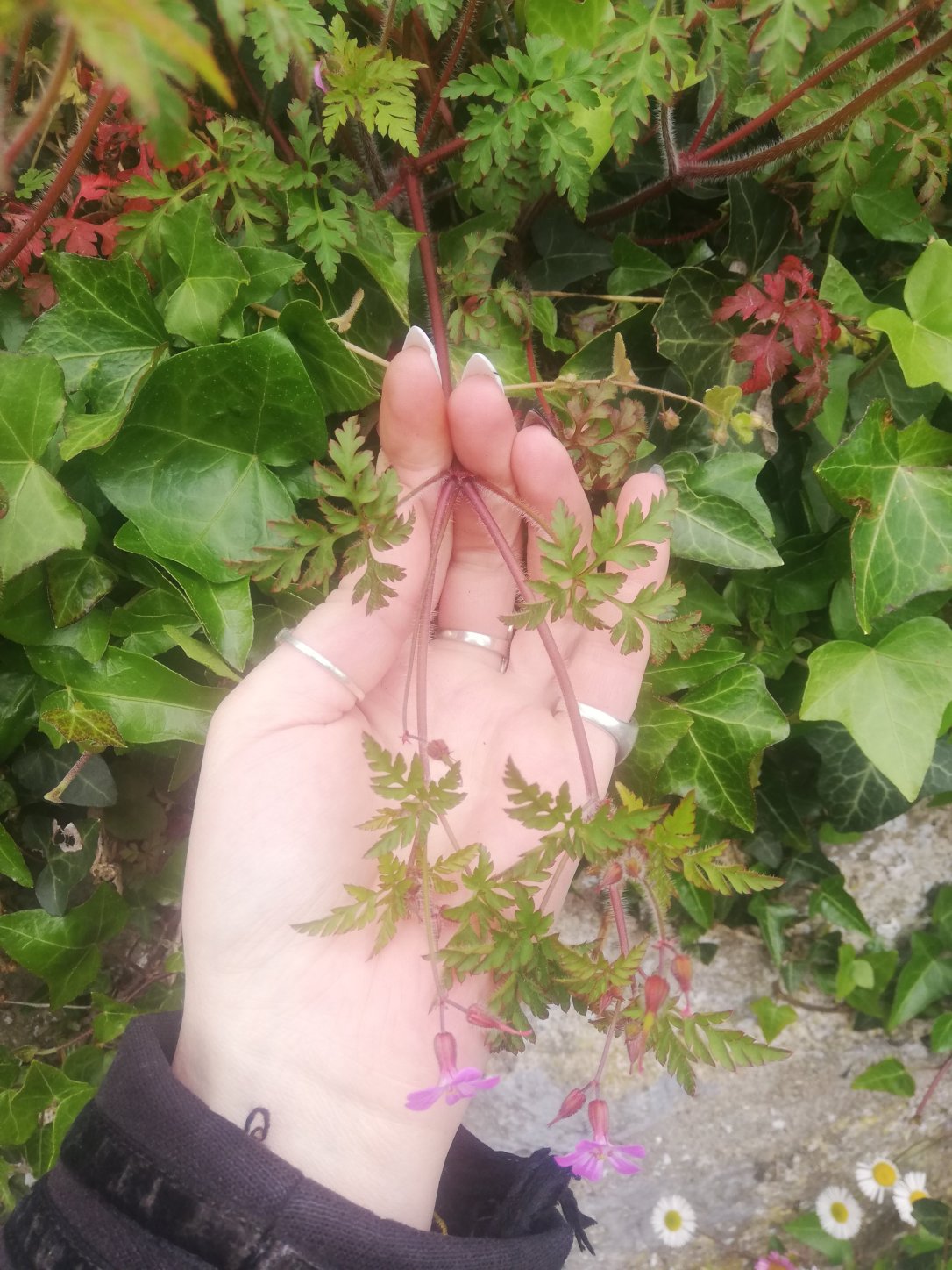 The shape of the flower bulbs. Often compared to birds bills.

Herb Robert is one of those plants that once you identify it, you will see it everywhere. It has many different names including (but certainly not limited to): Roberts Geranium, Squinter Pip, Cranesbill, Storksbill, Red Robin, Bloodwort, Felonwort, Forgotten Treasure, Crowsfoot, Stinky Bob (my favourite name so far) and Fox Geranium.

The latter of the names refer to its pungent smell, especially after rain. To me, it does smell mildly foxy (and a bit like parsley) and has a flavour…well, I wouldn’t go as far as to describe as unpleasant, but it’s not encouragingly tasty (it tastes and a bit musty). A few leaves slipped into a spicy salad would go unnoticed but on it’s own the flavour lingers.

Some people believe the name Herb Robert comes from the botanist and Abbot, (later Sainted) Robert of Molesme, although I can’t find much supporting evidence other than his fondness of healing herbs. Another speculation is that its from the fact that part of the Latin name could be a corruption of ‘Ruber’ meaning red.

Herb Robert was once used regularly as a tonic, nowadays it seems to have fallen out of favour (it doesn’t taste that bad, promise). I however, think its greatly useful and do nibble on the fresh young leaves as I pass them and dry the whole plant for use as in tea.

I add it to my Fire Cider recipe, drink it in tea (in small doses and with other flavours like rosemary) and add it to my Alter and spell work to represent Venus

Not recommended for use when taking blood thinning medications. Or during pregnancy or for children. As always, I am not a Doctor so do talk to your GP if you plan on adding Herb Robert to your diet and Do Not consume anything unless you are 100% sure you have identified it correctly.

Follow The Life,Musings and Experiences of a Modern Witch on WordPress.com

This weekend is the festival of #lughnasadh marking the start of the harvest season.
Talk about abundance! This Elder branch is nearly blocking the path now, weighted down by all it's berries.
#lughnasadh (or #lammas) is nearly upon us, marking the beginning of the harvest season.
Slightly late posting but here is day 4 of our #vanventure.
My daily spread for today. Looking pretty cosmic.
The Full Moon post is now up on the blog. Slightly late as I was busy experiencing it first.
Loading Comments...
%d bloggers like this: